Corippo, the works of the albergo diffuso are well underway20 January 2021

With a delegation, the Ambassador of the United States to Switzerland, Edward McMullen, visited Corippo and the Verzasca Valley.

The President of the Foundation, Fabio Giacomazzi, welcomed him and guided him through the village, among past stories and projects for the future.

Below is an outline of the welcome 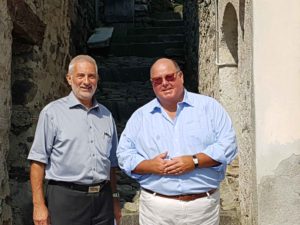 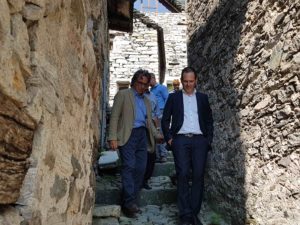 as chairman of the Fondazione Corippo it is an honor and a pleasure to welcome you here in Corippo and to greet you. I also greet you on behalf of the population and the authorities of the village.

With 10 inhabitants Corippo is for the moment still the smallest municipality in Switzerland. It will still be for a few weeks, because in October the aggregation with the other six municipalities of the Valle Verzasca will take place, in order to form a single municipality for the whole Valley.

There are close and strong ties between small Corippo and big America. In 1850 the village still had almost 300 inhabitants. Then began a slow and constant demographic decline, due to emigration in the United States and more precisely in California.

Your family name suggests that you are of Scottish or Irisch origin; Scotland and Ireland also had known in the past two centuries a great migratory flow towards the United States; therefore you know what I am talking about.

The Corippeans have settled in the region north of San Francisco Bay: Napa Valley, Marina County, Sonoma County, where many of their descendants live today; also in the Salinas Valley, Monterey County, south of San Francisco. They dedicated themselves mainly to agriculture and trade, using the skills they brought from their homeland; some made a good fortune.

The famous Marina County Civic Centre, designed by Frank Lloyd Wright, was built in 1960 on the grounds of a Scettrini Ranch, belonging to a family originally from Corippo.

There is also a descendant of corippean emigrants, Michael Silacci: he is one of the most renowned oenologists in the United States; he is the head of the Opus One Vinery, in Oakville, Napa Valley, belonging to the Baron de Rotschild group.

But back to Corippo. 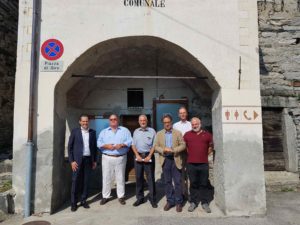 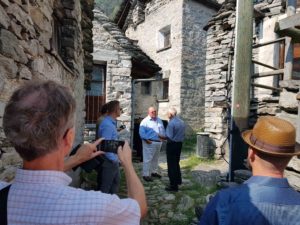 In 1975 Switzerland participated in the European Architectural Heritage Year proclaimed by the Council of Europe, by presenting four typical localities to be protected and enhanced; among these, for Italian Switzerland, there was Corippo. It is in fact a settlement that has kept virtually intact the appearance it already had at the beginning of the 19th century; the main characteristic is the stone, with which the walls, roofs, stairs and floors of the alleys and courtyards are built. The surrounding landscape has also remained almost intact. In order to follow up the promised commitments, the Swiss Confederation, the Canton Ticino and the Municipality created the so-called Fondazione Corippo 1975.

The Foundation’s purpose is to take all necessary action to preserve, revive and promote the village of Corippo, namely to purchase and manage property and to act as manager, coordinator and contractor for all preservation work.

The initial intention of the Foundation was to bring new inhabitants to Corippo. With this in mind, two buildings were renovated and have been permanently inhabited to this day. The Foundation bought and kept open the village tavern in all these years. In order to improve the basic living conditions, the Foundation created covered parking boxes at the entrance of the village and contributed to the financing of the water supply system.

Unfortunately, the goal of halting the demographic decline has not been achieved. Over time, it was realized that many houses in the village of Corippo are too small to be adapted as permanent homes, without altering their original architectural appearance, which must be absolutely preserved.

Later, when we visit some of these houses, I will explain why they are so small.

In order to revive the village respecting its architectural and urban characteristics, the idea of the albergo diffuso (scattered hotel) was born. The concept of scattered hotel in the case of Corippo can be described as follows:

With this idea, our project won the Swiss Hotel Innovations Award in 2017. This gave us great national and international visibility. Numerous media around the world have been interested in this idea of interpenetration between hotel and residential area.

To limit ourselves to the Anglo-Saxon sphere, we had an article in the NY Times and reports at CNN and BBC, as well as on several websites specializing in sustainable tourism.

As you can see, the renovation work on the buildings has started and is progressing rapidly. It is planned to open the hotel with the restaurant in June 2021. When the work is finished we will have 12 rooms with a total of 26 beds and a restaurant.

With the visibility that our project has achieved, we are convinced of the correspondence of a large and select clientele. We therefore have great confidence in the success of the initiative; it is a “unique selling proposition”, which responds to a developing tourist trend. We are expecting many guests also from the United States.

Thank you for choosing to visit us and for your interest and attention.

Explanations during the visit 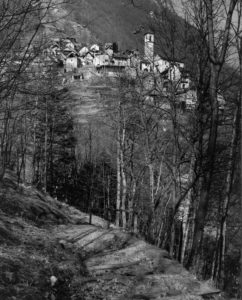 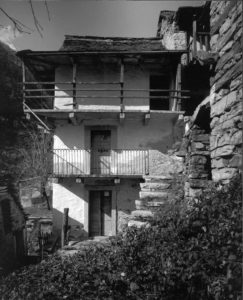 The houses of Corippo are made up of two, maximum three, rooms of four meters by four, one on top of the other; there are no internal stairs; to go from the kitchen to the bedroom you have to go out on the public alley and pass by external stairs.

The reason why the houses of Corippo, like those of the other villages of Verzasca, are so small and sober is due to the practice of transhumance agriculture. The members of the families almost never stayed together at the same time in their house in the village. It could happen a few times a year, at Christmas and Easter. For the rest of the year, depending on the season, they would stay in places even far away: in winter on the Piano di Magadino, between the towns of Locarno and Bellinzona, to overwinter the cattle; in late winter and autumn they would look after the vineyards on the sunny slopes above this area; in spring they would cut the hay on the fallow land; in summer they would take the cows and goats to graze on the highland pastures to produce butter and cheese. They therefore had several small houses in different places and had to carry all their effects from one house to another on their shoulders.